What Is Shadow Therapy, And How Can It Benefit You?

Home/Gifted/What Is Shadow Therapy, And How Can It Benefit You?
Previous Next

What Is Shadow Therapy, And How Can It Benefit You?

The personal shadow develops in everyone from childhood. It encompasses thoughts, feelings, and behaviors that we do not accept. The reason is because they are incompatible with the social norms and the “should be” of the imposed ideal personality. We banish qualities that do not fit our ideal image. The ego, and the shadow are built simultaneously.

Through my own personal experience, I have observed that our education, through parents, teachers, relatives, religion, etc., contributes to the formation of the shadow by saying what is allowed and what is not. We tend to think that everything in the shadow is negative, and this is a lie because talents and aptitudes that remain hidden also reside in it. The shadow remains connected to the depths of the soul in its purest state.

It is pertinent to note here that the shadow is only dangerous when we do not pay attention to it. It is possible that looking at the shadow for the first time causes us a lot of conflicts, confusion, or fear. The shadow can appear in an illness, a vice, constant family and social problems, and even in dreams that alter our nervous system. The symptom is always the missing information that we need to internalize. It comes from the shadow, so it’s hard for us to recognize it.

What Is Shadow Therapy & What Is Its Main Motive?

The goal of Shadow Therapy is to identify blockages and disinhibit them, removing conditioning. Every disease and stagnation result from a bodily, sexual, intellectual, or emotional stagnation. Healing is made up of energy released, not repressed. Working with archetypal information, we open doors through disciplined rituals that correspond to our level of understanding. We cannot fail to integrate the shadow, recognize it as ours, and look at it so as not to project it. We need to give it a voice and express it in a creative and healthy way because if you do not recognize your shadow, you are not complete. The repudiation of any principle is the surest way that we come to live what we repudiate. The shadow therapy can also build your self-esteem and boost your confidence level, acting somewhat like a low self-esteem treatment.

It would not be wrong to say that Shadow Therapy is a loving, compassionate, and courageous work designed for people who have looked deep enough into themselves to have assumed that “I am also what I don’t like about myself.” It is meant for those who want to stop apologizing for who they are and stop blaming others for their childhood and for what they have become. Shadow Therapy, in short, is for individuals who want to rise above themselves and stop excusing themselves in their conflict and laziness. It can also go a long way to healing self-hatred.

Benefits of The Shadow Therapy 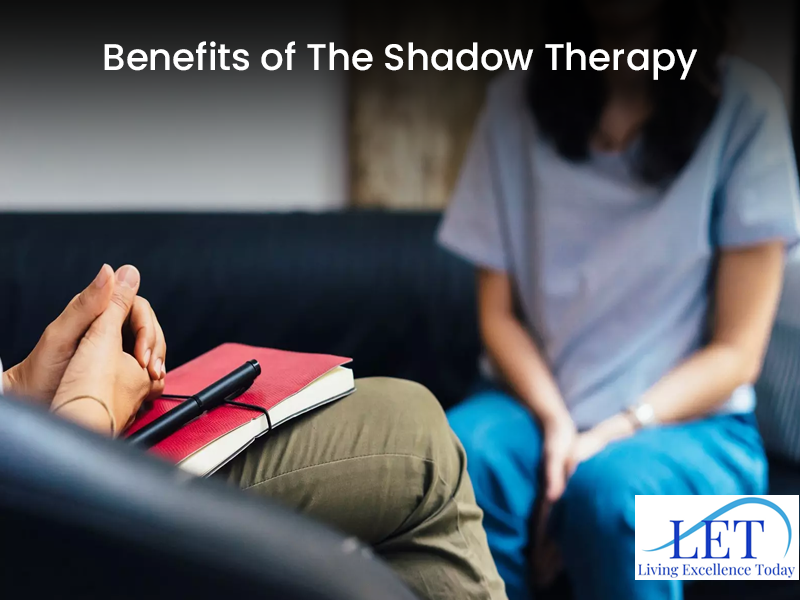 Since understanding your own shadow has a lot to do with facing the repressed parts of your personality, the Shadow Therapy promotes self-awareness so that you can get in touch with your suppressed emotions. In fact, the Shadow Therapy not only makes you more aware about yourself but also helps you handle negative conflicts more effectively and work on the overall improvement of your health.

Shadow Therapy helps to bring the unconscious or unknown parts of yourself in contact with the known parts of yourself. Though your shadow will consist of both of your negative and positive traits, the negative side tends to play a bigger role in your shadow as those traits are more likely to be met with disapproval from others. The main aim of the Shadow Therapy is to lead you to personal growth and development.

Depending upon what traits of your personality are hidden in your own shadow, the Shadow Therapy helps you get in touch with knowing your own intuition. You must have heard many mental  health counselors saying ‘trust your gut’. Knowing your gut feeling is a major benefit of Shadow Therapy.

Along with helping you face your negative traits, Shadow Therapy also offers you a chance of reclaiming the gifts that might have long been hiding in your shadow. Through Shadow Therapy, you  feel free, empowered, confident and slowly move towards self-realization.

You might feel a little apprehensive about knowing your negative side. However, gaining an understanding of your own personality, even the unpleasant ones, will help you realize when they are overpowering you, allowing you to make a change.  A research from 2011 showed a strong correlation between self-awareness and self-control.

Knowing about the unknown parts of your personality will help you see the power that you have to change a situation. That is precisely the reason why Shadow Therapy plays an important role in empowering you and also lets you face and accept the truth.

Being a mental health counselor, I do agree that since Shadow Therapy involves uncovering parts of yourself that you don’t even know existed, it can be a difficult journey. However, that doesn’t mean it’s not worthwhile.

Though Shadow Therapy has a lot of benefits, it does not make you reach perfection or at a stage where no further growth is needed. In contrast, it teaches you to continuously seek growth throughout your lifetime so that you can always become a better version of yourself.

Shadow Therapy is all about confronting your own shadow and bringing it to the surface. It’s all about bringing your unconscious mind to your conscious awareness. One thing to keep in mind when practicing Shadow Therapy is to give time to the process. Since it involves bringing the parts that have been hidden for so long, the process can be overwhelming. However, you must let it evolve on its own and not force anything.

Note: You can also go for confidence counseling or spiritual counseling online to overcome other mental health struggles.

Let Yourself Be Empowered With Me

At Living Excellence Today, I, Gurpreet Kaur, licensed professional counselor am committed to helping you realize your self-worth. If you are ready to take one step closer to being confident and self-assured in your life, get in touch with me today.

About the Author: Dr. Kaur